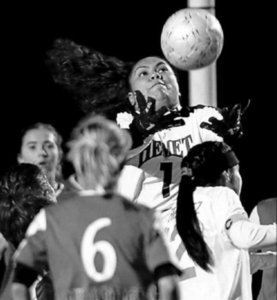 HEMET»  Thaiz Hernandez’s speed has been the biggest offensive weapon for San Jacinto this season. She showed Wednesday that she can also hurt opponents when she’s standing still.

Hernandez found the top corner off a well-placed cross from Eliana Martinez in the 70th minute to give the Tigers a 1-0 victory over Hemet in the first meeting of Mountain Pass League girls’ soccer powers.

Indeed, Hernandez said she had a good idea the ball was coming her way when Martinez took possession following a throw-in. So she found a seam near the front of the goal.

“I saw her going out wide,” Hernandez said. “I thought maybe she would get it there.

Hernandez has scored 20 of the Tigers’ 53 goals this season. It was the eighth assist for Martinez.

Aside from that moment, defense ruled the day.

Hemet (12-2-4, 2-1 in league) had the better of possession in the first half, and the Bulldogs appeared to have several transition opportunities, but couldn’t finish. Elisha Avila was stopped at close range by San Jacinto goalie Ana Barajas after a dangerous run, and Shayden Skinner put one off the crossbar after a feed from Avila.

In the second half, however, the Tigers took control of the run of play, even if the Tigers’ favorite offensive weapons were held in check.

“Most of our goals this season have come from getting the ball behind the defense (with long balls),” Guzman said. “But Hemet plays their center back way back and that made it hard. We had to try to play away from her.”

pressure from the advantage in possession paid off.

“The other team gets all those throw-ins and crosses and corners, and bad things are going to happen,” said Hemet associate coach Craig Dwinell.

Following Hernandez’s goal, Hemet made a push, forcing three corners in the final 10 minutes after having none until then. But the Bulldogs never got a clean look. Skinner’s shot from a bad angle was high in the 74th minute and a relatively harmless shot from Skinner was saved by Barajas in the final minute.

“Hemet has always been a powerhouse in this league,” Guzman said. “To come here and get a win like this is very big for us.”