March Students of the Month 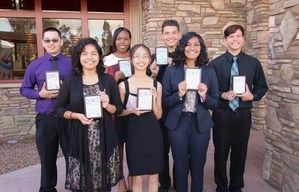 Sponsors of the Student of the Month Program donated backpacks filled with gifts, gift certificates, a plaque, Certificates of Recognition, and much more. The students had an opportunity to thank their families and teachers who have supported them and helped them plan their future life goals.

Anusha Koka was selected as the Hemet High School Student of the Month. Anusha was nominated by her teacher and Mock Trial Coach, James Walsh, for being a diversely talented student. Anusha currently holds a 4.69 GPA, is in choir, is President of the Habitat for Humanity club and has been a mock trial lawyer for three years. In the fall she will be attending the Pennsylvania State-Thomas Jefferson University's Accelerated Premedical-Medical program to pursue her career plans on being a general family practitioner. Mr. Walsh said, “In any one area Anusha is remarkable, but the breadth of her talents is what makes her nearly unbelievable.”

Valery Carrillo was chosen as West Valley High School’s Student of the Month. Valery was nominated by her PE coach, Rose Aiken, for always looking for ways to improve herself. Valery has been in the school’s band all four years of high school. She approached Coach Aiken in an effort to strengthen herself to improve her performance. Valery plans on attending Riverside Community College and transferring to the University of California, Riverside or California Baptist University to pursue a career as part of an orchestra or symphonic band.

Jasmine Randolph was selected as Tahquitz High School’s Student of the Month. Jasmine was selected by her Government Teacher, Chris Fowlkes, for always being on-task and on-time with her work. Jasmine will be the first person in her family going from high school straight to college. She will be attending San Francisco State University to major in international relations and pursue a career in that field. She is currently enrolled in a number of Advanced Placement classes and extracurricular activities. This is her first year at Tahquitz and said the transition was hard, but thanked Mr. Fowlkes for recognizing her and said “It means a lot to know that someone has taken notice of my effort.”

James (Jimmy) Gillam was selected by Craig Miller, his ASB and leadership teacher at Hamilton High School. Miller said he nominated James for being a leader on campus. James has been a part of the school’s Cross Country, Track, and Wrestling teams all four years. He was league champion in his weight class for wrestling, and qualified for CIF individual finals all four years. He is the ASB secretary and Chairperson for the school’s “Every 15 Minutes” program. He will be attending Sam Houston State University to major in Criminal Justice and pursue a career as a Police Officer.

Anthony Finney was nominated as ASPIRE Community Day School’s Student of the Month. LaVerne Williams, Counselor, nominated Anthony for his perseverance and integrity. She said he has faced challenges with conviction and determination. Anthony said he ended up being kicked out of ASPIRE and he realized he wasn’t proud of where he was going. He reached out to Principal Cristian Miley and asked to return and promised he would be a better student and person. This semester he received a 4.0 GPA and plans on attending Mt. San Jacinto Community College to become certified in their automotive program and will then explore a career as a deep sea welder.

Congratulations to all the students, teachers, principals, and family members. It was an inspiring morning celebrating these students and their bright futures.