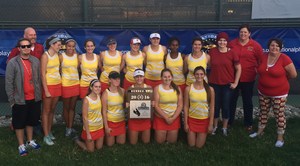 This year, Hemet High's Girls' Tennis Team, made it to the CIF Finals for the first time in 21 years!

Hemet High School’s Girls’ Tennis Team competed in California Interscholastic Federation (CIF) Southern Division Finals for the first time in 21 years! Their dream to make this a successful season, coupled with the attitude of taking it one game at a time, allowed the team to make it to CIF. The team ultimately lost to Rancho Mirage High School, but the team’s spirit has continued.

The team began practicing for the season during the summer. “I think this team wanted to stand out and write their own story,” said the Hemet High Girls’ Tennis Coach Catherine White. Throughout the season the team discussed the importance of teamwork and staying focused on the task at hand. They stressed the importance of taking the season one match at a time. White said the team was determined all year on making it to CIF, because it hadn’t been done in over two decades.

“I do have to say that I have never been a part of a team as a player or a coach that has worked this hard, dreamed this big, and had this much faith in themselves and their teammates,” said White. She continued to express her admiration for the team and how they inspire her to be a better coach.