Hemet sets sights on next season after loss 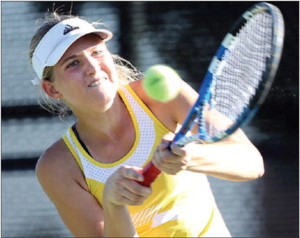 It’s easy to make future plans when you’ve got all but three seniors coming back, and losing just one starter, and it’s hard to deny the Bulldogs’ horizons look bright after their 2016 run.

CLAREMONT Only moments after losing to Rancho Mirage, 12-6, in the CIF-SS Division 5 finals at The Claremont Club on Friday, the Hemet girls tennis team was already looking to 2017.

It’s easy to make future plans when you’ve got all but three seniors coming back, and losing just one starter, and it’s hard to deny the Bulldogs’ horizons look bright after their 2016 run.

“They’re young, so we’ve got plenty of time to come back for next year and the following year,” said Hemet coach Catherine White,whose team won the Mountain Pass League title and took a 13-match winning streak into its first finals appearance in 21 years.

Hemet (18-6) was playing catch-up from the beginning Friday, when No. 2 singles Zoe Marsh lost a 7-6 (6) opening set to Kayla Eatonthat sealed the first round, 4-2, for the Rattlers.

The margin for error shrunk with each round and Hemet began the third round down, 8-4, and needing to win at least five sets to have a chance. The Bulldogs were up in all three third-round doubles sets early, but ended up dropping two of those, allowing Rancho Mirage (21-0) to get to the magic number of 10.

“There was a little bit of pressure; these girls are young,” White said. “But when I told them we still had a chance at it, they all stepped out on the court for the last round and we were up on five courts. That tells me that they did want it and they were fighting for it.”

Heidi Buri and Simone Springer teamed to win two sets, 6-3, 6-3, in Hemet’s No. 1 doubles spot, while Jardynn Puckett and Abigail Carl won a set, 6-1, to round out the Bulldogs’ total.

It was the first title for Rancho Mirage, which opened its doors in 2013.