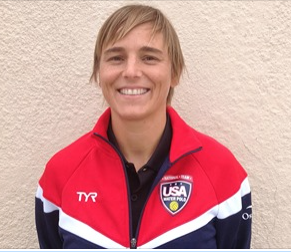 BERKELEY – Coralie Simmons, a two-time Division II National Coach of the Year honoree and a silver medalist as a player at the 2000 Summer Olympics, has been named the new head coach of California's women's water polo program, athletic director Mike Williams announced Friday.Simmons has spent the past nine seasons as the head coach at Sonoma State University and has also coached in the U.S. Women's National Team Program. She was as an assistant for the U.S. Women's National Team that won the gold medal at the 2009 FINA World Championships, and served as the head coach for the U.S. Junior National Team that won the gold medal at the 2015 FINA World Junior Championships."We are beyond thrilled to welcome Coralie to the Cal family," Cal athletic director Mike Williams said. "Coralie has ascended to the top of the sport as both an athlete and coach, and is the perfect person to lead our women's water polo program. She is a true winner, and is as well-respected as anyone in the water polo community. We can't wait to see the incredible impact she will make on our program."Simmons was named the National Collegiate Player of the Year twice during a dominating career at UCLA, where she also captured the prestigious Pete Cutino Award, given to the top player in the country. She also led the Bruins to the first-ever NCAA championship in 2001.Simmons was Team USA's co-leader with nine goals in helping the Americans bring home the silver medal at the 2000 Games in Sydney, Australia. She was an Olympic teammate of former Cal great Heather Petri, who served on the interview committee that ultimately selected Simmons as the Bears' new coach.Simmons was named to the Pac-12 All-Century Team that was released in May. Petri called Simmons "the best athlete in the world" when they joined forces for Team USA."I've followed everything she's done, and I've been very impressed with how she has a fresh perspective on our sport," Petri said. "Her competitive drive has transferred so incredibly well from being an athlete to being a coach. She has an innately beautiful way of looking at our sport. It's something that can't be taught."After serving as an assistant coach at both UCLA and Hawaii, Simmons became the head coach at Sonoma State in 2008. In just her second season with the Seawolves, she earned ACWPC Division II Coach of the Year honors. She repeated the feat in 2015."Besides being one of the greatest athletes our sport has ever seen, Coralie has become well-known in our community for being a passionate and creative coach and leader," U.S National Team head coach Adam Krikorian said. "Her joy for competition and the details required to achieve big success is unique and contagious. Cal is fortunate to have someone who is always searching for the next way to evolve and improve, and who cares deeply about the people she works with." Current Cal seniors Emily Loughlin and Stephanie Mutafyan were members of the 2015 U.S. Junior National Team that played under Simmons."Her resume speaks for itself," Mutafyan said. "Not only is she an incredible athlete, she's an incredible coach. Even though I only had her for three months, I have so much respect for her as a coach. I think she's just what we need."Simmons replaces former head coach Richard Corso, who stepped down from the position in August."First of all, I would like to thank all my past and present athletes, administrators and fellow coaches at Sonoma State for providing a fulfilling and memorable nine years," Simmons said. "I am honored and humbled for this opportunity to join the Cal aquatics family. Berkeley has always captured my attention due to the world class education, student-athletes and alumni. But my decision to take the reins at Cal was largely due to the remarkable Cal spirit and support that defines the water polo program. I look forward to working with an amazing cast of student-athletes and hope to continue the tradition of success."
http://www.calbears.com/news/2016/10/14/simmons-named-cal-womens-water-polo-coach.aspx?path=wwpolo Source: University of California, Berkely
Published October 14, 2016 Print