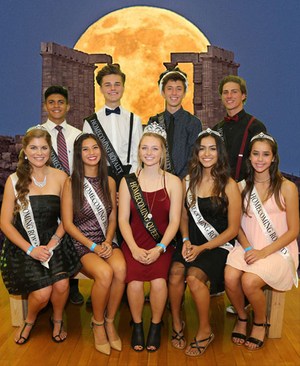 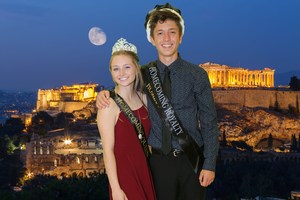 Micah Hitchcock was crowned King at the Night in Athens Homecoming Dance.

Throughout the Friday night football game, many students and fans were actually socializing in the stands and on the way to and from the concession stand. Many were actually off their phones and talking face to face with one another, reminiscent of year’s gone by before cell phones.  Hemet lost the game to Jurupa Hills 34-21.

Even though the homecoming game was important for the football team, it was also one of the biggest celebrations of a high school student’s life when the homecoming court and the crowning of the queen took place during the halftime ceremony. Last year’s Queen, Camryn Bootsma, presented and crowned Carli Thornburg Queen as her name was lit up followed by a spectacular fireworks display. Princesses were Madison O’Brian, Mikayla Ambriz, Ashly Ramos, and Talia Dixon.

During the homecoming dance, Queen Carli presented Micah Hitchcock the Kings crown at a dance attended by over 850 students and guests. Students were in line, ready to go at 7 p.m., others showed up fashionably late but were in time to see the King Micah crowned and then everyone was on the dance floor until the very last song at 11 p.m. Prince’s were Adam Huxell, Kyld Dewick, and Bruno Gomez.

Many people have commented on what a great evening and weekend it was. The planning and preparation by ASB was amazing and everyone thoroughly enjoyed their weekend. Now it time to rest before we start taking our SAT and PSAT’s in October and prepare for Halloween.