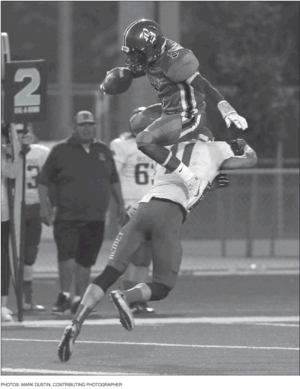 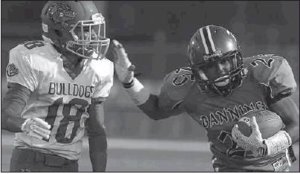 The game was a lot closer than the score indicated.

Banning's Eric Ellison (5) hurdles over Hemet's Zane Munsinger in an attempt to gain a few more yards on a carry during the first half of Friday night's game at Banning High School in Banning. Hemet won the opener.

Banning's Armond Wiltz, right, puts a stiff arm on Hemet's Danny Gomez during the first half.

Hemet football coach Jason Thornburg would be the first to tell you his Bulldogs made their share of mistakes in a 36-20 victory Friday night over Banning.

Thornburg did have one play which shifted the momentum in the third quarter when quarterback Joey Iribe hit Anthony Gonzaleswith a 79-yard touchdown just 51 seconds after halftime. Thornburg called for a fake screen and Gonzales was open by at least 15 yards. The Banning defense bit hook, line, sinker and even some of the fishing line.

“We had run four screens in the first half and we thought they would make adjustments for that,” Thornburg said.

Banning had made a Week 0 mistake, but Hemet followed with its own error.

Hemet’s coverage of the ensuing kickoff left something to be desired and Armond White took full advantage, returning the kickoff 90 yards and cutting the lead to 16-14. Hemet stopped the 2-point conversion.

Iribe gave his team some comfort with two rushing touchdowns in the fourth quarter. Senior Dashon Rogers ran for a first quarter touchdown and Elijah Bratcher recovered a fumble in the end zone.

“We had four turnovers and made mistakes on special teams, but our kids had gave a good effort,” Thornburg said. “Our defense held firm after the turnovers.”

It was the first game for both teams. Next Friday, Hemet hosts Cathedral City and Banning plays Desert Mirage in Thermal.