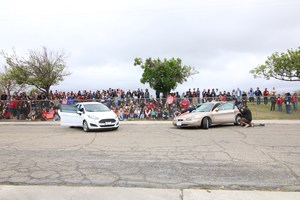 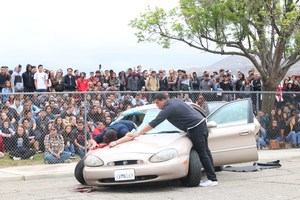 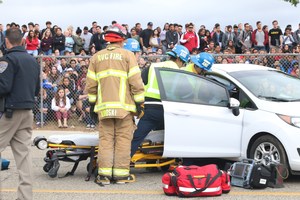 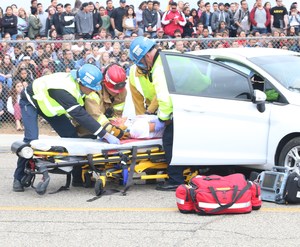 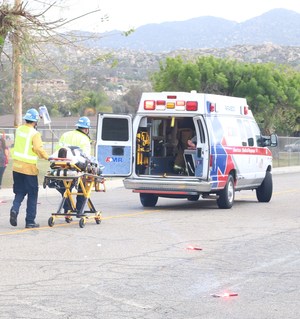 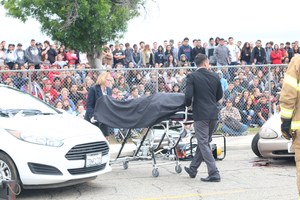 An event dedicated to raising awareness of the dangers of driving under the influence was presented at Hemet High School.

On Thursday, April 28th, students gathered along Dartmouth, to witness a vehicle collision. This car accident was staged by ASB and local agencies to show the possible consequences of drinking under the influence. As students walked to the scene a 9-1-1 call recording played.

Students saw two cars, feet apart, with significant damage. The air bags in both the vehicles were deployed, windows were broken, and a student was ejected onto the hood of a car. Just as one of the drivers got out of his car, police sirens filled the air. For an hour, students witnessed protocol for police, fire, paramedic, and the coroner as it pertains to a traffic fatality.

The hardest part of the day for students was watching the deceased’s mom come to the scene. Students cried as they watched the mother scream for her son and asking police why no one was helping him. Her cries pierced the hearts of those present and seemed to make the event seem all the more real.

On Monday, May 2nd, Hemet High’s student body gathered into the gymnasium to attend the funeral of the students that “died”. Students listened to a representative from the Riverside County Coroners Office, parents, and students who spoke of their fellow students.

Statistics show that every fifteen minutes, someone in the United States dies of a traffic collision. This program raises awareness of the dangers of drinking and driving and hopefully causes people to think twice before getting behind the wheel.

Click here to watch the video of Hemet High School's Every 15 Minutes event.